Impact of the WestConnex Development 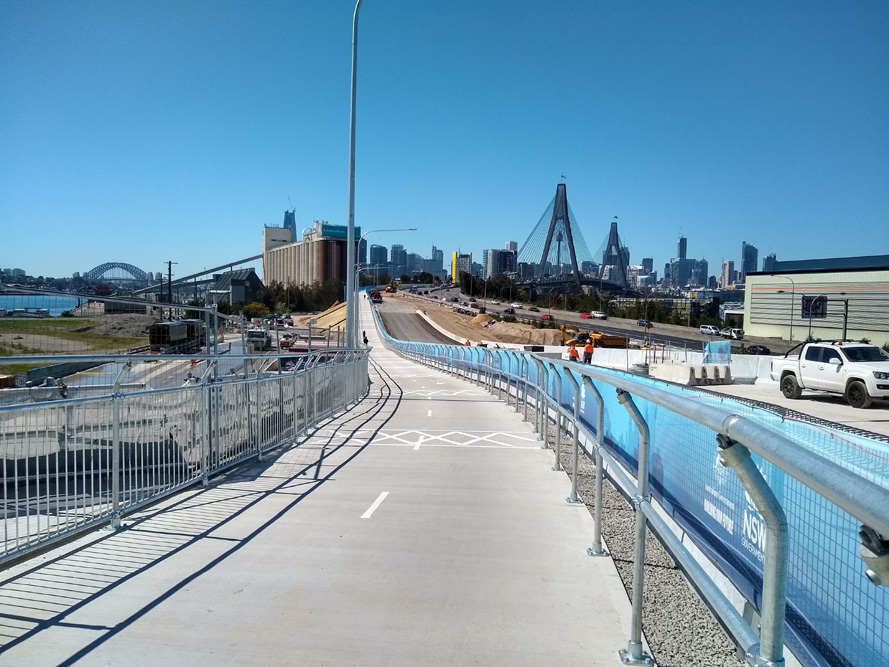 The WestConnex Development at Rozelle and on the approaches to ANZAC Bridge has resulted in major disruption to walking and cycling on the western approaches.

The walkway/cycleway path from Victoria Rd to the ANZAC bridge was also removed in early 2020.

During September 2020 an alternative walkway/cycleway was opened linking Victoria Rd near Lilyfield Rd to the ANZAC Bridge near the Australian Digger statue.

Walking and Cycling on ANZAC Bridge

The northern side of the ANZAC bridge has a shared pedestrian walk way and cycle way. This way provides excellent views up the harbour from the old Glebe Island bridge to the Sydney Harbour bridge. The Australian digger statue, the New Zealand soldier statue and their commemorative plaques can be viewed close up. 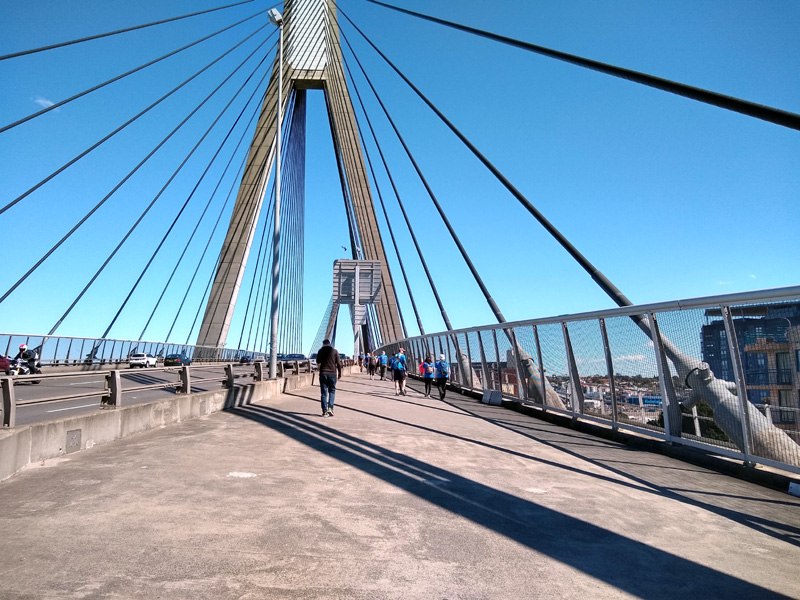 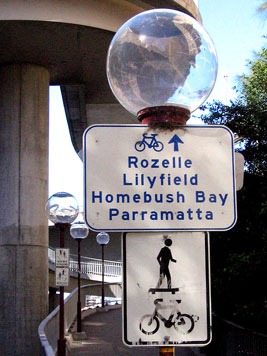 The walk way links the suburbs of Pyrmont on the Sydney city side to Lilyfield to the west.

You can start the walk from the Pyrmont side at the spiral ramp near the corner of Quarry Master Drive and Saunders Street in Pyrmont.

Directions - To find your way to the ramp from the city by walking, cycling or public transport -
go to the bottom of this page.

The rest station at the top of the Ramp has a plaque called "A Little History" Details on the earlier bridges as well as construction time lines and statistics about the current bridge. Facts and Figures 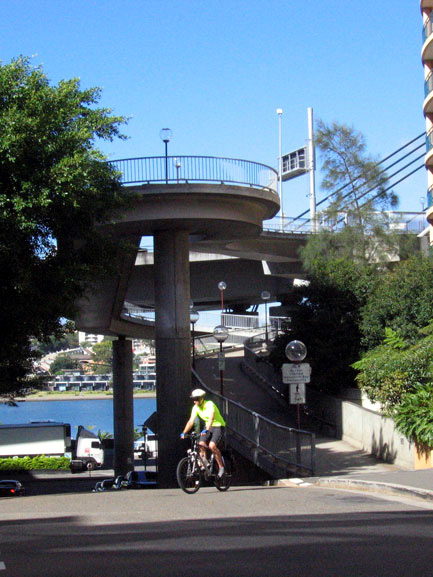 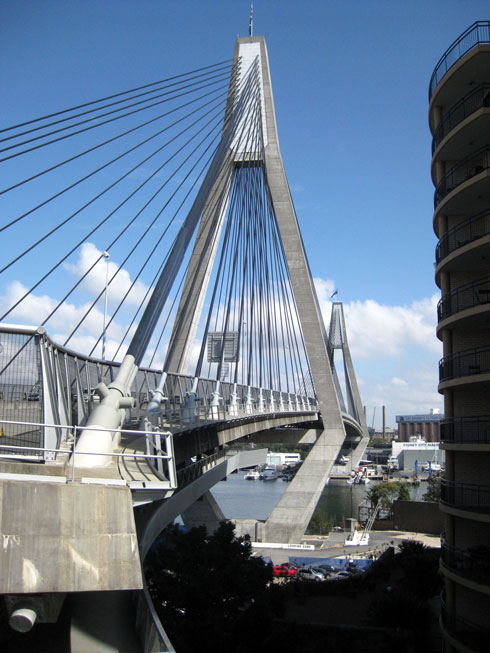 Take your camera - there are some great artistic shots to be had. 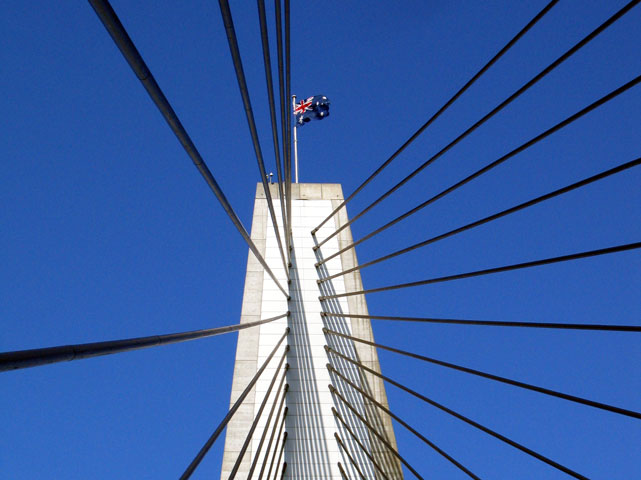 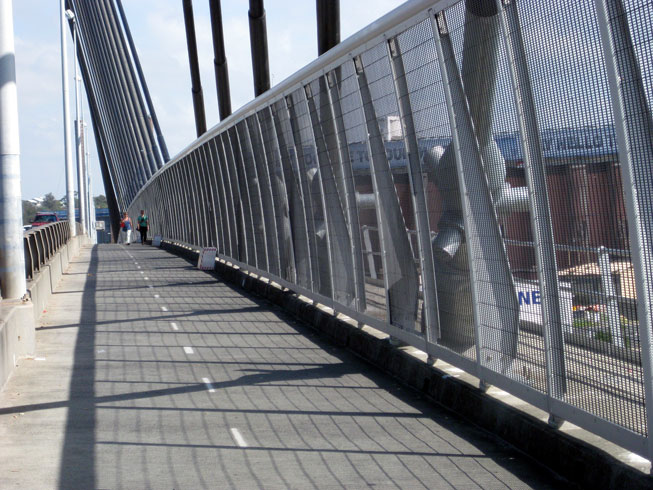 Approaching the middle of the bridge 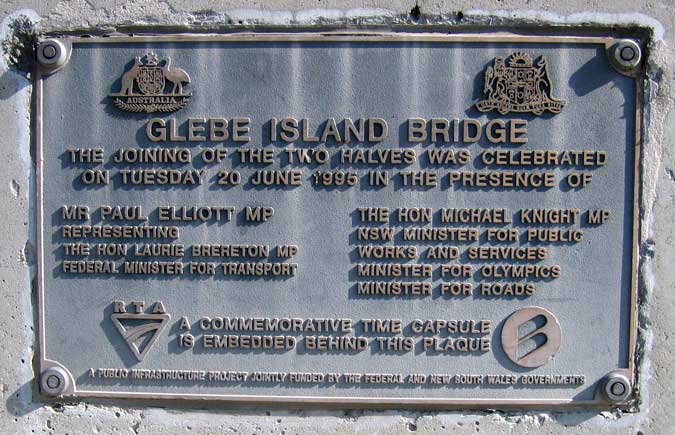 Halfway across the bridge a plaque commemorates  the joining of the two halves on the 24th July 1995.
A time capsule is embedded behind the plaque. But there are no clues as to what is in the capsule or when it is to be opened. 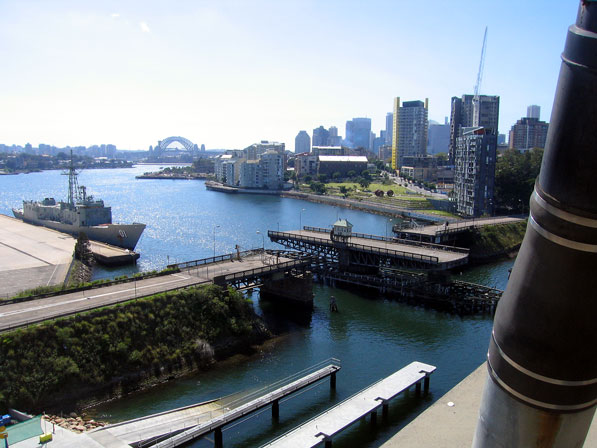 Looking over towards the Sydney harbour bridge you can see the old Glebe Island bridge It is permanently open although closed for sporting events such as the Sydney Marathon which now uses the old bridge instead of ANZAC Bridge. (2009)
It is now difficult to take pictures like this owing to the small mesh size of the safety fence. Perhaps some well placed camera "peep holes" should be provided. 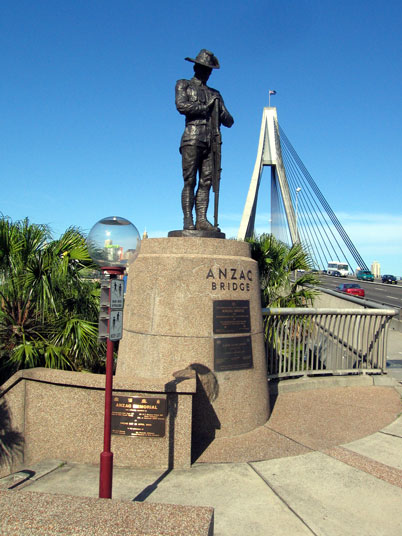 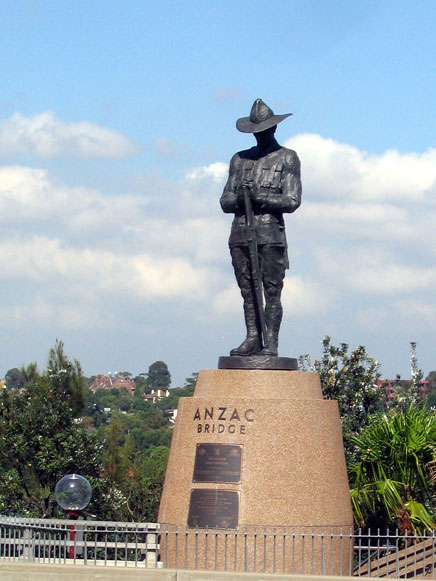 Looking across the roadway to
the New Zealand soldier.

The western side of the main deck is home to the two commemorative soldier statues. On the northern, walkway, side is the Australian Digger with the New Zealand soldier across the road.

A walk way next to the Australian Digger takes you around under the bridge to the New Zealand Soldier.
The structure on the underside of the bridge is well worth a look.

More about the ANZAC soldier statues

From the New zealand statue you can either return across the bridge or if you are up for about a 4km walk or ride you can follow the path down from the NZ statue to James Craig drive and then following around Blackwattle Bay through Jubilee Park and end up at Sydney Fish Markets.

The WestConnex Development at Rozelle and on the approaches to ANZAC Bridge has required the removal of two walkway/cycleway bridges, the Beatrice Bush Bridge and the bridge over Victoria Rd near Lilyfield Rd.

The walkway/cycleway path to the ANZAC bridge from Victoria Rd and the Cauarina trees lining it was also removed in early 2020. 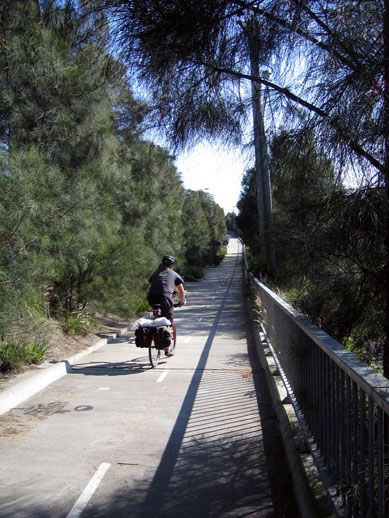 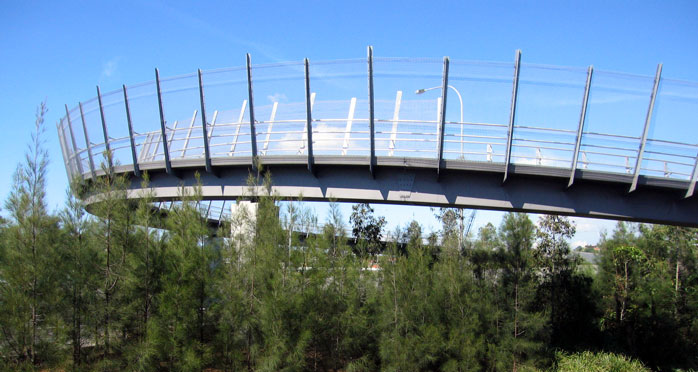 Beatrice Bush sold newspapers seven days a week, whatever the weather, at the intersection of Victoria Road and The Crescent White Bay for more than 25 years.

Selling from the traffic island, her customers were the drivers coming off ANZAC Bridge (or the old Glebe Island Bridge) waiting at the lights at the Victoria Road intersection.

It is fitting that the walk way over Victoria Road adjacent to her traffic island be named in her honour (2005).

More information about Beatrice, including a picture of her, can be found at the Powerhouse Museum website. 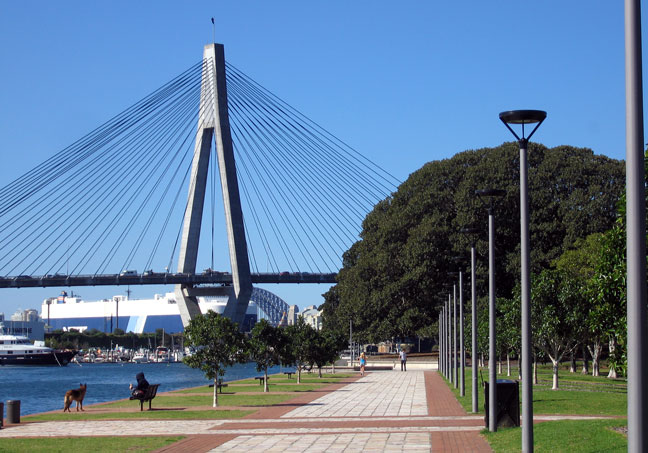 How to find the Ramp to the ANZAC Bridge walkway - Pyrmont end.

Return to top of page